The short answer is yes. However, a large number of Vegans feel that that meat substitute products are unethical because it is still promotes meat consumption to a degree. It resembles meat, and is meant to taste like meat. In fact, most herbivores suggest that people use meat-substitute products during the transition period because these items are highly-processed. Most of these types of products also contain Seitan, also known as “wheat meat,” or gluten.  Seitan is high in protein, but it is not a complete protein source because it does not contain all of the essential amino acids that plant and even regular meat has. According to Dr. Axe, Seitan can promote the following (see picture to the right). 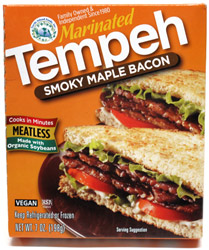 Now, I have tried Tempeh bacon, and to me, it tasted like dog food.  I have also explored a couple of other meat substitutes including vegan crab cakes. Personally however, I find the unprocessed plant-based foods to be more appetizing. For example, if I desire a burger then I will mash some black beans and other plant ingredients to make one. I have also made spaghetti with eggplant and  buffalo and lemon pepper flavored cauliflower wings. Yes, Vegetarians and Vegans can eat meat-substitutes, but we should be weary of the source. Is it coming straight from the Earth or a factory?