On Saturday, April 15th-the date when Americans’ taxes are generally due- over 25,000 people in Washington D.C., marched around the White House property to demand that

Trump release his tax returns. In New York, over 45,000 peacefully protested around Trump’s properties to call for the President to make due on his vow. Others marched just outside of Trump’s Mar-A-Lago estate, where he was staying that weekend. In addition to protests in these major U.S. cities, over 150 other rallies around the country took place in the same vein. While I originally traveled to D.C. to participate in the American Society of International Law Conference, it was an absolute honor to exercise my Free Speech right by marching in the nation’s capital. Like many other citizens around the country, Trump’s lack of compliance with this tradition is something I feel strongly about for the reasons listed below: 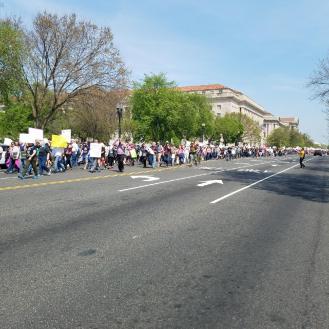 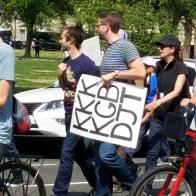 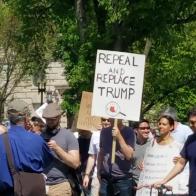 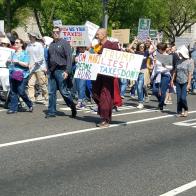 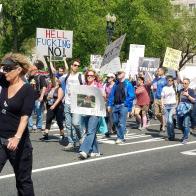 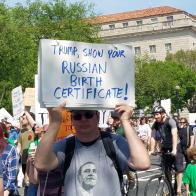 3. Refusing to release your tax returns is untraditional
Every President in modern history, more specifically, since 1946 has released his tax returns. I chose to list this point because DJT represents the Republican party, which prides itself on being traditional.

With that being said, calling on Trump to release his tax returns is not a partisan issue. Surveys have said that more than 70 percent of Americans want him to release his taxes, including many Republican members of Congress. Quite frankly, this is an American issue.

4. Refusing to release your tax returns is UN-American
Our President is supposed to represent the United State’s interests domestically and internationally, hence the reason candidates have historically released their tax returns. This action is important because provides evidence that the candidate does not have any conflicts of interest.

5.Refusing to release your tax returns undermines our democracy
Transparency and accountability are important to maintaining a democracy. Trump, it is your duty to assuage your constituents’ fears about your allegiance to Russia. Releasing
your tax returns is an easy solution to this issue. Now, Trump, you may be wondering why is this

a problem that deserves your concerm. TO put it simply, AMERICANS CARE, which is why you should also care as well.

“In America, no one is above the law, and all of us are subject to it,” the Maryland congressman said. “If you don’t release your taxes, we have no way of knowing if you are putting America first, or Donald Trump first.”
You have already admitted that you do not pay anything in taxes, and you still won. So, what else are you hiding?

6. Refusing to release your tax returns is hypocritical

Trump spent years prior to Obama’s election, and during Obama’s presidency demanding his birth certificate. Trump also inspired other groups of citizens to demand the birth certificate as well. Nevertheless

, I listed reasons couple of reasons why these two documents are essentially the same.
– Both documents can establish that the Presidents have not violated a part Constitution (President must be born in the U.S. and Treason)
–Both were demanded by millions of US citizens, including yourself

7. Trump you must release your tax returns because everyone should pay their fair share.

To conclude, Trump, I am happy that you are paying attention. That is a start, however, the fact of the matter is that YOU can resolve all of the conflicts that are surrounding this issue in the same way you called on President Obama to do so. Respectfully, your other option would be to continue to “hide the smoking gun,” while your White House circle continues to collapse. In any event, the tax marches will continue, and I hope to definitely be a part of them!

What are your thoughts? Have any points that you would like to add? Want to see more political posts? Let me know in the comment section below! Have a good weekend everyone 🙂