An American’s observations about European Restrooms, or “Water Closets”

Traveling to Europe was naturally, a culture shock for me. As an American, exploring the continent over a  month-long period, one of the most striking differences between the two places was in the bathroom system.  Going into this experience I was open-minded to the new and different experiences, but the one thing that I could not overcome was in the bathroom situation. With that being said, when one is traveling in Europe, use a restroom when you can, so you can avoid paying for one when you have to use one.

So why do you have to pay for the restroom

Now, for someone on a limited budget who planned on being out exploring most days, paying to use the restroom proved to be a costly inconvenience. I cannot even begin imagine the expense that people with weak bladders or pregnant women incur as a result of this practice. Moreover, I wondered about how many people developed kidney problems because of this system.

In any event, the average cost for these restrooms starts at 50 cents. The most expensive one that I saw cost 2 whole Euros in a shopping plaza area on the Champs Elysee. I’m sure it was a beautiful bathroom, but once I saw the price advertisement I made a sharp U-turn to find a cheaper restroom. To make matters worse, restaurants, including fast food establishments indirectly charge people to use their stalls. For example, only customers are able to receive the restroom key, or code. It is sort of similar to the “For Customers Only” sign that one sometimes sees in major U.S. cities.

This money goes to the establishment, and in part to the attendant(s) whose job is to ensure that the bathroom is clean. This is a necessity in densely populated cities as the bathroom can quickly become pig stys. There’s a debate about whether a bathroom is considered a public service which should be compensated upon each use vs. a human necessity to use the restroom. Tell me what you think in the comments below!

In The Netherlands, I  discovered my first unisex bathroom. To restate my initial feelings from an earlier post in my Netherlands segment, I felt shocked, puzzled and for a second, scared when I

Tip: Learn the word for women and men in each country you visit. In The Netherlands it is “Dames (Dah-mez)” for women.

I also took a day trip to Amsterdam, where I saw public urinals! According to Concrete Playground, “Waternet’s plan is to send the fluid to a recovery plant, where the all-important phosphorus will be filtered out and transformed into fertilizer. From there, it’ll be transported to farms and flower gardens.Fertilizer without phosphorous is kind of like coffee without caffeine — lacking the crucial kick. Even though phosphorus is, in and of itself, a renewable resource, modern agricultural access to it depends largely on phosphate rock reserves. Given that they’ve taken millions of years to form, they’re very much finite. But the good news is that, according to several studies, one individual’s urine delivers sufficient nutrients to grow food for themselves, as well as meet 50-100 percent of the dietary needs of another person.”

In Germany, I discovered that they have toilet brushes in public restrooms! I guess people make a habit of 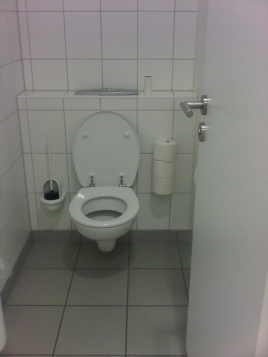 “doing the doo” in the public “badezimmers,” and the Germans expect people to clean up after themselves. Fair enough. However, I cannot imagine most Americans complying with this social norm. For starters, most people would not want to touch the same dirty stick that other people used after doing their business (lol). Additionally, most Americans are comfortable with the fact that there are custodians who will clean the area…eventually (and for free). I remember being a cashier at Publix, a chain grocery store in the Southeastern part of the United States, and witnessing one of my colleagues clean a stall in the male’s bathroom that fecal matter all over the wall! It was disgusting, to say the least, but absolutely hilarious.

The first bathroom I used on the European continent had a flush button that looked similar to the one pictured below. It took me about 5 minutes to figure out how to flush

the toilet because I was so accustomed to using a lever. When I finally realized that the buttons were white and at the top of the toilet, I had to tackle the dilemma of figuring out which button I should use. The smaller of the 2 is for #1. Note: the buttons are sometimes in the wall as well.

Germany even had ATM machines in the train station restrooms, along with turnstiles at the entrance of each entrance points.

WHY ARE THERE TURNSTILES AT THE ENTRANCE OF THE WATER CLOSET? lol

When I was in Frankfurt, I watched one lady insert 50 cents, so that she could enter, and then another lady walk right through. This led to a huge argument in which the lady who essentially stole  her money argued that it was fine for her to do the because “She had to pee.” In the end, one of the restroom attendants intervened and let both of them in to use the restroom. Prior to that moment, I had never seen an argument erupt over entry into a restroom, but I guess the circumstances of paying for the restroom (and bad behavior) could lead to such scenes.

GERMANY, WHAT IS THIS MONSTROSITY? Either I used a lot of restrooms in Germany, or the water closets are very odd… Apparently, in Germany, some toilets have shelves so that people can

admire the twisted concoctions that their bodies excrete. Okay, that was pure sarcasm lol The actual reason these Flachspüler toilets exists is because Germans actually inspect their excrement! Maybe that’s the reason toilet brushes in the stalls are pretty standard…

With that being said, never ask a German how they are after they have just left the restroom. They are known for their brutal honesty, and they will likely give you too much info lol 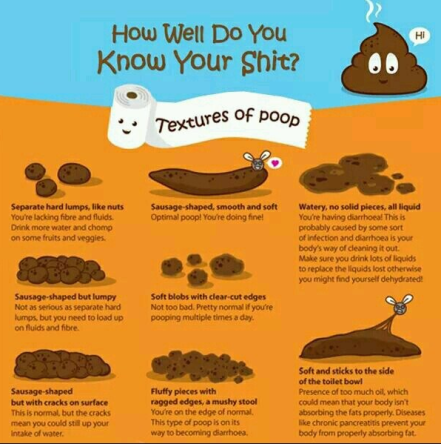 I haven’t had a chance to visit Italy yet, but during my travels, I discussed this topic with  fellow

Americans who told me about their experience ‘popping a squat’ over this contraption.

What are your thoughts? What do you think about the bathroom debate? Tell me in the comment section below!