Before I begin this piece, it is important that you as a viewer see how beautiful parts of Haiti once looked.

The category 4 hurricane with 130 mph winds destroyed part of a country that was still recovering from the 2010 earthquake that left the country in shambles.

Hurricane Matthew has proved to be a formidable force, not only in the United States, but in

Haiti, the country most devastated by this natural catastrophe. With the death toll listed currently at just under 900 people dead, this island country in desperate need of humanitarian assistance. The storm has passed, but in its aftermath, there is still a danger of a cholera outbreak, which is primarily caused by water that has been tainted with sewage. At least 10,000 people were killed as a result of the cholera outbreak that occurred in 2010. There is also a need for resources such as food, clean water, and living quarters.

Personally, I think it is a shame that this country has barely received any media attention in comparison to other similar crises. There were no Facebook filters or calls to donate on any Social Media platform. If anything, I have seen Haitian victims disrespected by the likes of Weather Channel representatives who have suggested that the Haitian children “are so hungry that they actually eat the trees.” That is absolutely absurd! As someone of Haitian and Cuban descent, I feel that I have a natural obligation to highlight this matter to my viewers. More importantly though, we all have an obligation as humans who inhabit this Earth to be compassionate to those suffering from such atrocities.

Neffer Kerr, writer at Ebony.com summarized the situation best when she wrote:
Between 1791 and 1804, Haitian slaves rose up and rebelled. They used their belief systems and religion as motivation and solidarity to overthrow the French. This was the only successful slave revolt and ever since then, they have been treated like the scourge of the world.

If you are able, please click here  to help those in desperate need. 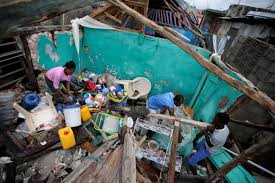