On my train ride to Germany, I saw a lot of street art along the train tracks. The feature picture was the most interesting to me because it was on the side of a beautiful building. I enlisted the help of a friend of a friend who was able to give me some background concerning this street art. It says “We are ashamed for all of those who cry out against us,” and it is referring to the immigration  crisis taking place in Germany.

Under Chancellor, Angela Merkel, Germany currently has an open-door policy towards refugees, who often have fled from Syria, Afghanistan, and Iraq. Naturally, there have been some culture clashes between the refugees and some of the Germans as the refugees have had to learn to assimilate to the laws and societal norms and etiquette of Germany. While, some of the adjustments have resulted in minor disputes, it has also led to a rise in the unemployment rate  and crimes committed by the refugees. By the same token, Germany has also seen an increase in the number of attacks against “asylum accommodations.”   In response to the influx of refugees, the “Alternative for Germany” (AFD), was formed by Frauke Petry. This organization strongly opposes refugees, and  advocates for the use of armed force to protect the German Border against refugees.

I managed to take a lifetime’s worth of train rides during my stay in Germany, but none of them were as tiring as my commute to this country. I was lugging my huge travel bag around, and I had to complete some school work during my commute. That proved to be a difficult task because Germans do not believe in free wifi! I had to pay 5 whole euros to use wifi in order to do some school work and contact my family about when I would arrive. Fortunately, the German transportation system was extremely efficient. I had to transfer 4 separate times, and I pulled into each station at the exact time listed on my ticket! Wow, this notion is unheard of in the U.S. (well that’s my experience at least).

I am passing a locks bridge in Frankfurt, Germany.

On one of my train rides, I guess I sat in the wrong seat because an elderly lady said

something to me and then, pointed to a digital sign above my seat. A young man sitting across from me translated, and then the elderly lady said “Tut mir leid,” which means I am sorry. I happen to know a few phrases in German, so I quickly responded by saying “No, I’m sorry.” In any event, switched to a set of seats across from her, and the young man decided to switch with me. I could only help, but to think ‘I’ve just revealed that I am a foreigner, he possibly knows that I am an American, now this man is curious, and he is going to interrupt my studying.’ He started to explain that the digital phrases indicated whether a seat was taken or not, and then I thanked him and then joked that hopefully, it wouldn’t change in the next few hours so I would not have to interrupt my studies again. Apparently, he did not get the hint that I was busy because he tried to spark a conversation.

Now as a single female traveler, I had to be very careful about whether I chose to answer a question and how I chose to answer it (thanks law school for the practice lol). I was in a new country that I was almost completely unfamiliar with, aside from what I had seen on television and heard from Germans in the U.S. Travelling to this country,  I was not expecting much interaction in Germany because this is a group of people that generally keep to themselves. However, I happened to run into the exception to that rule. For the most part, though, the conversation was pleasant.

Here are some of the pictures I managed to capture on the train ride (Keep in mind that we were moving at a rapid pace): 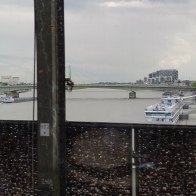 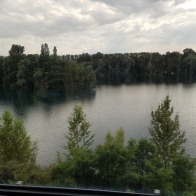 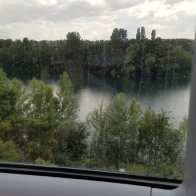 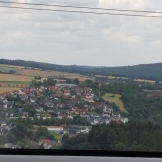 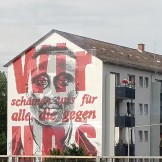 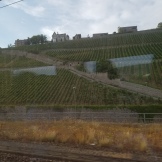 After spending all of day light traveling to Bavaria, Germany, I finally reached my destination, and I was thrilled to see my family. It was almost a relief knowing that I would spend the next week in their company in this foreign place. I’ll explain more next time! 😉